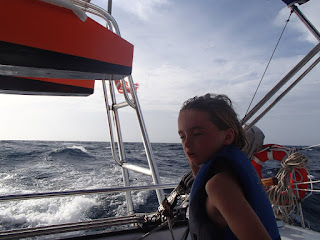 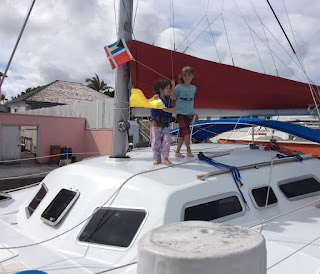 Had the Gulf Stream to ourselves Thursday as all others likely were heading Chris Parkers warning of 20-30 knot S, SW winds. The perfect sailing weather! Did Islamarada to Nassau 185 mile in 24 hours. The last 14 hours spent sailing with just the headsail. Heading south to the Exumas today.
Posted by Last Paradise at 5:27 AM 1 comment: 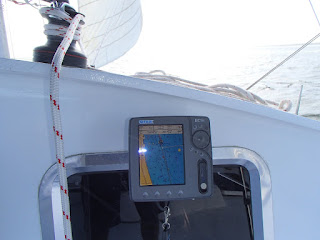 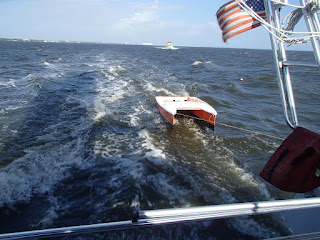 Heading south on the ICW close reaching on non tidal waters inshore of Cape Caniveral. Hit 14 knots towing the dinghy with the new Pelagic Auctopilot steering. This picture was a second run after I went and got the camera!
Posted by Last Paradise at 5:53 PM 2 comments: 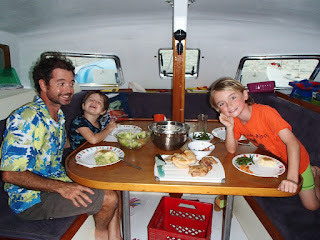 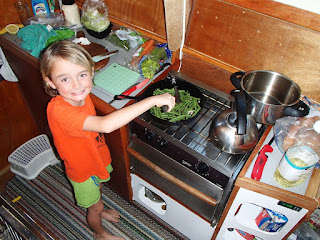 A comfortable family cruiser!
Posted by Last Paradise at 5:51 PM No comments: 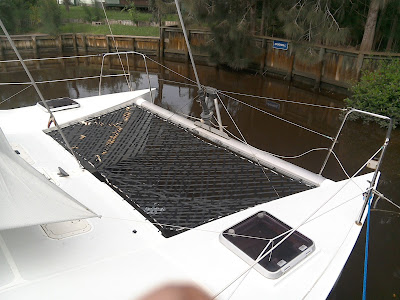 The catwalk I had made originally was rather heavy and fairly bendy. I was looking to drop the 60 pounds as well as remove the risk of damaging or breaking the catwalk when hauling anchor in a rough anchorage. The anchor had led thru the catwalk and will now launch off the forward beam. I have also added a small manual windless on the mast. I'll be carrying more chain 90' of 8mm high test on future cruises and the windless will be useful in deep anchorage. Its been a rainy past few months so haven't been rushing to get back sailing. I made this new net myself. It was much harder to make than originally envisioned, but is nearly complete. I was amazed it took a total of 600 feet of 1" webbing and I probably could have used another few dozen feet. I strung this one in place, but will built a jig and work on a flat floor of I ever do one again. Its also important to get the first few passes aligned just right, something I failed at. It was almost an epic failure and I nearly quit after the first 300' but a custom net like this would run around $2200 so that kept me motivated. Still probably had 60 labor hours in this one and still need to finish the lashings and UV coat it.
Posted by Last Paradise at 5:23 AM 2 comments: 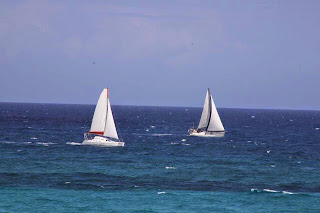 Sailing outside in Exuma sound. Photo shows one of the two mid 40ish monos we passed on this 8 mile upwind leg. Someone told me a PDQ sailed the race a few years ago in these conditions and they "thought the boat might fall apart". We experienced a few slight slaps on the underwing, but nothing that disturbed our forward progress or Abbys test mug of water on the saloon table!
Posted by Last Paradise at 10:58 AM No comments: 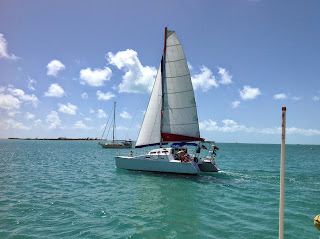 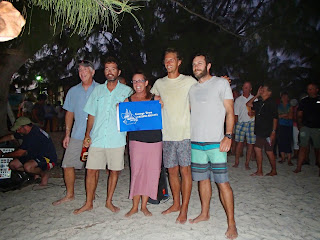 Took first in the main event the round island race and 3rd in the harbor race. I believe we would have won overall but they did not award a firsT overall this year as they were short on rum. We sailed the 18 mile course which envolved 8 miles of beating into tradewind seas only 10 minutes slower (elapsed) than a performance Crowther 42 cat with daggerboards. There was a bit of grumbling about the rating of MoJo, but we simply out sailed the other boats and pushed the boat on all points of sail; beating all cats under 46' but the Crowther boat for boat. We had so much fun we are thinking of doing Abaco Race Week this year or next.
Posted by Last Paradise at 10:30 AM No comments: